So, one week in to my placement in the Fisheries Administration what have I learnt?

Let’s see shall we…

Well, first of all I now know that I have a direct boss called Sophea and a big cheese boss called Hong Hyi.

After a week of working here I now instantly recognise Sophea when he walks in thanks to the Cheshire cat sized anxious grin he displays every time he is in my presence.

Hong Hyi on the other hand is much more self-assured and offers me no such non-verbal cues to assist me in identifying him.  He does however, have an unruly, straggly mass of under chin hair which has so far saved me from making a ‘do I know you’ faux pas on 2 occasions to date.

Secondly, I know where my office is, how to access it and how to switch on the A/C and light.  I also know it’s actually really just a corridor used to access my neighbour Danith’s office who has seen countless VSO volunteers sit at my desk during his 10+ years in post.

I’ve also discovered 2 clean, un-smelly toilets on my floor and have purchased a bar of Lux soap for each (I wonder if anyone has noticed?).

I know that I work near to a ridiculously opulent shopping centre, akin to the Trafford Centre or Meadow Hell (Sic), where the majority of the stuff on sale costs at least a third of my monthly allowance – so if I’m ever feeling flush and need a new pair of Clarks shoes this is where I will head to.

In fairness, there’s also a really good food court and some nice independent food outlets (as well as Starbucks, Costa and a soon to open Krispy Kreme franchise) so it may become an occasional haunt if I fancy a treat rather than heading home for lunch.

Yesterday, I learnt where my EU team is located (for those of you that don’t know, my placement is funded as part of a massive EU programme supporting the development of fisheries in Cambodia).

Mid-morning the wifi went down. I first knew something was wrong when I heard people talking to each other in the corridor and adjoining offices.  Usually the floor is bathed in a silence, only punctuated by the hum of airconditioners but yesterday it was almost rowdy.  It soon became apparent that the demise of the wifi had led to the staff in the building doing something radical – coming out of their offices and talking to each other.  It seems that, unless you are in a meeting, you generally sit at your desk gazing at goodness knows what on your computer whilst failing to acknowledge anyone else exists.

Anyway, back to my point.  I’d finished my photocopying and needed to read some documents that had been sent to me online.  But with wifi down I joined my counterparts and engaged in this unusual activity… I went for a walk.  Only five minutes across the compound, but a walk none the less and one that led me to the second building in the compound where I had had my initial meeting on Monday.  I popped my head around the first door I came to and asked for Bert (the EU programme co-ordinator) and before I knew it I was in his office drinking 3in1 Nescafe and learning just a little bit more about what we do here.

I have become aware of the vast variety of fish, crabs, other assorted aquatic creatures and plants to be found in the rivers of Cambodia – The Mekong & Ton Le Sap – and also along the coastline.  We have pictures of them everywhere and there is even a rather manky looking fish tank containing some in the entrance to my building.  I’m also aware that there’s a lot of legislation around fisheries, both in Cambodia and worldwide and that in the administration we are working towards achievement of a comprehensive and ambitious 10-year strategic plan.

But beyond this I really don’t have a clue.  I sit at my desk and read things that don’t make a lot of sense.  I can’t ask questions because I’m not quite sure what to ask and I’m not really sure who to ask anyway, I think poor Sophea will implode if I ask him anything more complicated than how to get a bottle of water delivered (this, incidentally, took 2 days and a lot of discussions about lack of budget (I gave up and paid myself in the end)).  It’s true to say that at times I truly do feel like a fish out of water.

Another fish out of water!  I am not alone

But confusion and lack of understanding aside – I’m happy.  Just as in yesterday’s post, I’m developing a rhythm of life to my working day.  Speaking of which, it’s time for lunch so I will bid you farewell and go in search of food and coffee.

Just in case I forget where I am 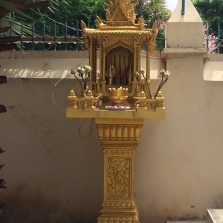 Our rather manky looking fish tank