Another milestone reached today.  I am now the proud owner of a Cambodian bank account!!!!!

Setting off from home at 8 this morning (in Sophat’s tuktuk) I wasn’t overly confident that this milestone would be achieved, having heard horror stories of multiple return visits, 3 hour long waits and the like from other volunteers.

I arrived at the bank at 8.15am and marched confidently through the front doors to be greeted by a very smiley young lady with excellent English who directed me to the second floor.

Arriving outside the bank

Once there I was greeted by a very smiley young man (yep there is a theme emerging here) who directed me to a bank of chairs.  I sat myself down preparing for a long wait, only to be called to the desk less than a minute later.  On getting up I managed to dislodge the whole row of seats and almost fall in to the aisle, but don’t worry I think only half of the bank saw/heard me as I lumbered about like a baby elephant!

Safely seated at the desk I handed my passport and introduction letter to a very smiley young woman who opened said passport, referred to my picture as ‘cute’ and then handed it to a woman in the bank of desks behind her and told me to please wait.

I did as I was told and 15 minutes later was greeted with the annoying news that my passport number was incorrect in the introduction letter.

Dejected, I took back my documents, packed my bag and made to head out, but not before knocking over a very attractive display of fake flowers with my big bum.  No biggy though, as again I think only half of the staff and customers in the banking hall (probably about 70 in total) noticed this and laughed!

The fake flowers before I unceremoniously dislodged them

A quick visit to the VSO office to get a new letter and I was back at the bank much to the surprise of the smiley young ladies and gentlemen behind the counter.  Once they had got over their shock at seeing me again so soon I was once again directed to a desk and this time managed to arrive and seat myself without destroying the fixtures and fittings of the bank in the process.

Again my passport and letter were taken and I was instructed to wait.  And I did, this time for about 15 minutes before a new smiley young man arrived with a handful of forms.  He sat down and began writing on the forms, occasionally asking me questions including my marital status (there was no divorced box on the form so we opted for single) and phone number (apparently it’s hilarious that I can’t yet remember this despite only having got my new number yesterday and have therefore stored it in my address book under ‘me’).

Forms completed, we moved on to the signing ceremony.  Over the course of 5 minutes I signed my name a total of 9 times – sometimes on forms written in Khmer, sometimes in English but each time not having a clue (or too much interest/concern) what I was signing.

Smiley man wandered off having asked me to please wait and so that’s what I did.  By this time it was 9.15am and for a few minutes I entertained myself by checking Facebook and Twitter.  Smiley man number 3 returned to obtain a 10th signature and then again I was left alone to surf.  Sadly, the 3g reception was pretty ropey and so I set to gazing around trying to read the various certificates and motivational posters (all beautifully framed) which adorned the walls of the banking hall.

At approximately 9.35am the monotony of the wait was broken by a vague tooting sound behind me followed by a not too pleasant smell wafting through the air.  Lots of sniffing and muttering by the staff and customers alike was swiftly followed by a subtle spraying of air freshener and once again the hum of normal banking activity was restored.  A while later I spotted a water cooler and got up to get myself a drink.  Whilst filling my cup I felt a pat on my bum and turned round to see the cheeky grin of a small boy obviously delighted with his actions.  His mum was not so overjoyed and proceeded to loudly berate him for his behaviour despite my protestations that it was ok.  Suitably chastised, the boy sat down and I returned to my chair to wait.

At about 10am my ears pricked up as I heard a vague approximation of my name being called from somewhere to my left.  I looked around to see another very smiley young woman waving me towards her.  Once there I was directed to another seat and asked to wait (surprise, surprise). 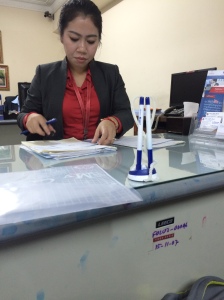 This wait was pretty short thankfully and once the person next to me had been dealt with I was invited to occupy her recently vacated chair in order to have my photo and fingerprints taken – in Cambodia you can legally sign by using your thumb print, which presumably people regularly do judging by the number of thumb print ink smears on the side of all the desks in the banking hall.

Once my identity had been electronically captured I was handed a small card by yet another smiley young man and told that my bank account was now open.

On returning my passport he informed me that I’d need to return in one week to pick up my bank card and activate the account, at which point I will no doubt be welcomed by smiley young men and women who will invite me to sit and wait.

One thought on “Becoming a grown up”