I went for a wander at lunchtime today, taking a different route for a change.  I found myself in a labyrinth of lanes behind the main drag and smack bang in the middle of weird and wonderful discoveries.
Whilst stopping to photograph a cute little shrine complete with mini monks sitting inside I heard a male voice calling “hello lady”.  On turning round I encountered a group of 2 men and a woman sitting around a low table drinking beer.  “Come join” the guy was calling, “drink, Chinese festival, drink beer”.  Despite my protestations that I had to go back to work he scrabbled round under the table and pulled out a can of Cambodia beer which he started to open.  I protested again and this time, with a slight shrug, he accepted I wasn’t going to take a drink and started pouring the can into his own, already half full, cup which soon started overflowing all over the table and floor.  The whole group corpsed with laughter and I quickly scurried off before more madness could occur. 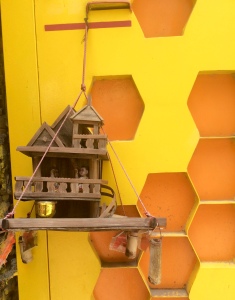 The shrine that led to the beer incident

50 yards further on and a group of boys caught my attention.  One of the boys had a lit cigarette in his hand which he was jabbing towards the top corner of the gate they were standing in front on.  Looking more closely I discovered what they were jabbing and jeering at – there was a monkey chained up in the corner behind the gate.  I couldn’t quite work out if the boys wanted the monkey to smoke the cigarette or they intended to burn him with it but either way the monkey was getting wound up and so I made another sharp exit. 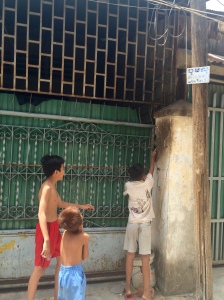 The boys goading the monkey

Further in to the labyrinth I peered in to shops and homes, nearly tripped over rice drying in the street and encountered the usual gaggle of tuktuk drivers all vying for my business at one of the crossroads. 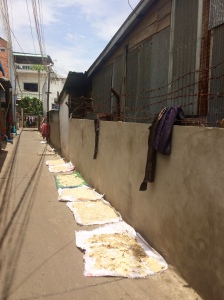 And then I turned a corner and boom! it was like I’d entered a parallel universe.  I was on the set of The Truman Show.  Having been immersed in a maze of old, shabby, ramshackle houses and buildings I had arrived in a newly built (well half built), artificial looking gated community complete with streets tweely named Acacia Street and the like!  The half finished houses were painted in muted peachy pink tones and the whole estate had a ‘showhome’ unreal look to it.  I turned around to see a raised boulevard of shops and beauty parlours complete with a foreign couple and their blonde haired baby pushing a trolley along as they window shopped.  This was all too much for me!   I looked frantically for the exit and once I’d spotted it darted towards and through it as fast as the incessant heat and humidity would allow only stopping when I was safely ensconced back in the shabby old Phnom Penh that I’ve come to know and love. 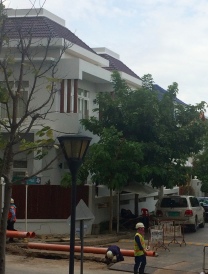 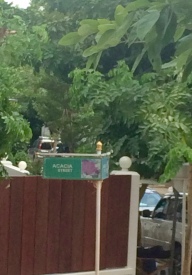 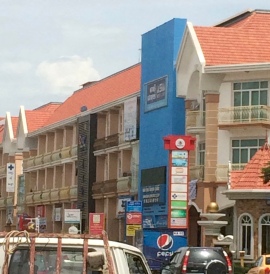