8.30am, Saturday morning Sophat calls up to let me know he’s here and I head down to set off on the weekend’s adventure – Motorbike training!

When Totie had asked me if I was going earlier in the week my first thought was, well I’ve got nothing else planned so why not.  By the time Vicky asked me what I was up to over the weekend on Friday evening this reason had matured into “I thought I’d go for shits and giggles”, closely followed by “If I survive it’ll make a great blog” and the piece de resistance “I think Jim (or Jumbo as spellcheck likes to call him) will melt or explode when he finds out!”

And so it began.  We (Totie, myself and an assortment of other new volunteers) waited patiently at the office for our instruction to begin.  At this point I would like to highlight the fact that in a nod to the safety talks given by the lovely Jumbo before I left I had chosen not to wear my flipflops, instead opting for sandals  – so much safer don’t you think!?

Unfortunately, the usual instructor (a Philippino volunteer) was unable to take the session so we were instead treated to a double act by the Cambodian Morecombe and Wise, Pisit and Pichchip from the VSO office.

Pisit had obviously been nominated as the straight man as he very thoroughly took us through the workings of the 125cc Honda Dream whilst I tried unsuccessfully to rid myself of the David Essex – Silver Dream Machine earworm playing on repeat in my head.

We learnt where to put the petrol in (directly under where we sit in case you’re wondering), the perils of buying the petrol in coke bottles sold on the street, how to check the oil, switching the suspension to carry a passenger (who knew that happened!!!!) and loads of other stuff that I promptly forgot.

All the while this was happening Pichchip was taking photos and laughing at them for reasons known only to himself!?

After a pretty protracted talky session, interspersed with English pronunciation spurts as poor Pisit struggled to enunciate words such as ignition and clutch we moved on to starting the bike up and changing gears.

Everyone had a go and then Pisit declared that it was time to go practice.  We were heading off to a wedding venue in the city which apparently had a big open space for us to practice on.

Tots practicing sitting on the bike

For some reason Eric Morecambe (Pichchip) was keen for me to hop on the back of his bike to get there and so, for the first time since I lugged it over from the UK, I put my shiny new helmet on.  Jim, you’ll be pleased to know that there was a degree of envy amongst all of the volunteers as I’m the only one that has the lifty up chin thing! 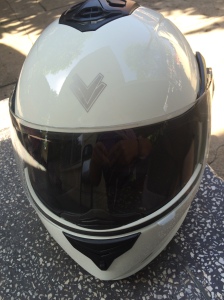 We swerved through the city streets (thankfully as I was behind Pichchip I couldn’t see where we were heading thus avoiding bursting his eardrum with a shriek as he nearly hurtled head on into a reversing car).

Once we arrived at the venue we took an on the bike selfie (we were still moving at the time Jim) and then I disembarked whilst Pichchip lined the bike up alongside the other 2.

A couple of the volunteers were eager to have a go and hopped on to head off whilst the rest of us stood around chatting.  And then it was my turn.  I handed my phone to Totie – obviously the most important part of this whole day was making sure it was documented in pictures) and hopped on the bike.

Pichchip talked me through starting her up, we shouted at Totie to move out of the way as she was positioned right in front of us, so fixated was she on getting the best shots, and then we were off.  Unfortunately for Pichchip I forgot to tell him that I’d ridden a bike before and so for a few seconds he hung on to the back to steady me as I accelerated away before finally realising that I was confident and letting go.

I bombed round the carpark area (well if you can call chugging along at about 15mph bombing) and had a play with the gears, mistakenly engaging the side stand rather than going down from 3rd to 2nd at one point.  No harm done, I sailed back towards the watching volunteers waving as I hurtled towards them before turning to do another loop.

Feeling confident I parked the bike up and got off and miraculously even remembered to take my glasses off before removing my helmet thus avoiding a comedy moment once more. 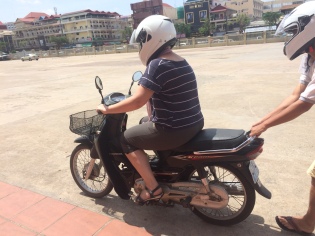 Next up was Totie and the poor girl was petrified.  Morecambe and Wise did a supportive double act as she started the bike up and then it all went a bit Pete T`ong.  ON being told to exelerate Totie did as she was told, just rather too harshly.  All we could see is Totie bombing off as Pichchip screamed at her to stop and Totie screamed back How all the while hanging on to the throttle for dear life.

Fortunately the 2 of them escaped unscathed and after a break to calm her nerves Totie successfully managed to master the bike, even managing to look up and in front of her at one point rather than doggedly staring at the dash as Pisit told her when to turn.

All in all the morning was a lot of fun.

Will I drive a motorbike in Phnom Penh? Not on your nelly!

Will I ride one in the provinces? Well maybe.

Will I remember totie and Pichchip’s screams?  For as long as I live!

One thought on “Silver Dream Machine”