As promised I’m going to share with you my recent trip to Kampot.  And what better way than via a superlatives award list.  So here goes.

Watching the kids on the fairground at the night market.  As well as a dubious selection of tunes encouraging us to firstly f*ck off and later on have sex (repeatedly), the behaviour of the kids themselves was hilarious.  Many feigned nonchalance the boys attitudes bordering on sheer boredom whilst the girls showed advanced motorbiking skills by mimicking their parents perfectly by not looking where they were going, drinking whilst riding and in one child’s case, blithely picking her nose with one hand whilst steering round a corner with the other hand.  from our distant vantage point everyone on the duck boat (our equivalent of the pirate ship) looked petrified, and rightly so as it was going scarily fast and as for the carousel – OMG is all I can say.  Check out this video as the ride warms up and pay particular attention to the girl in green! 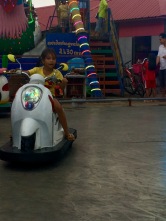 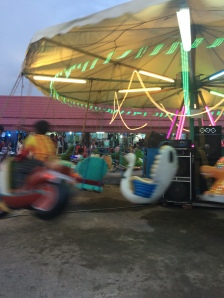 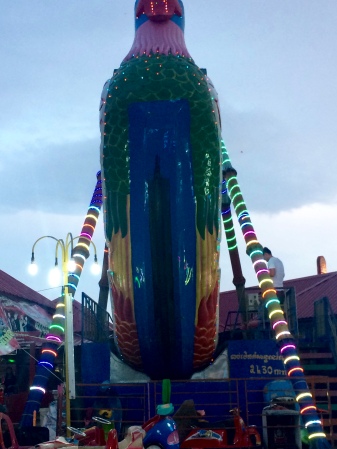 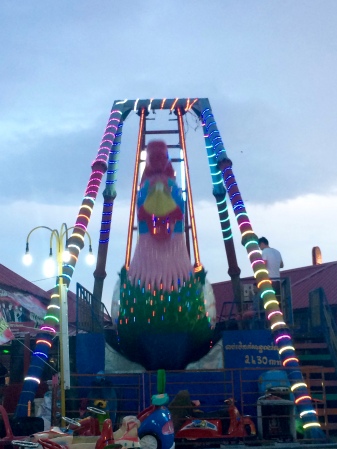 Goes to our tuktuk driver on the first day, who having negotiated a price for our trip to Bokor mountain (we found out too late that tuktuks can’t go up!) then attempted to emotionally blackmail us into paying twice as much for the shorter trip we ended up taking to the Secret Lake.  And even after we’d clearly told him no (Vicky used Khmer, I used stroppy gesticulations) he tried once again when he dropped us off at the guest house. Result… he got exactly what we’d first negotiated – not a penny (or more accurately Riel) more.  Whereas, our cheeky chappy from the Kep trip the following day got the original higher price he asked for despite agreeing to accept less just because he was so lovely. 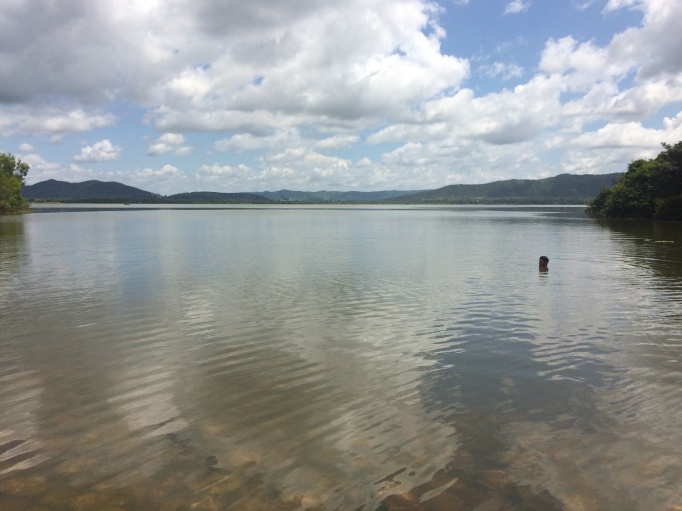 Is awarded to our Guest House (The Little Garden) who, despite only charging $8 for our room, think it’s ok to charge the same price to anyone dumb enough to nick the threadbare, sandpaper like towel and a princely $100 to anyone who has the audacity to nick the bathroom door (yep I know that brings up so many questions and that’s even before you find out that ours had a big hole punched in it and the lock hanging out).  You can check out the full list of prices (apologies for the poor quality photo) below.

Kama, one block back from the river wins this award hands down.  We liked it so much we went 3 times (twice in one day), I’ve written them a glowing TripAdvisor review and they’ll definitely be my number one choice for a place to sip a cool shake whilst I watch the world go by from when I next visit Kampot. 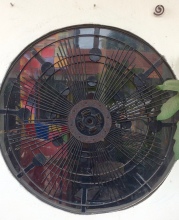 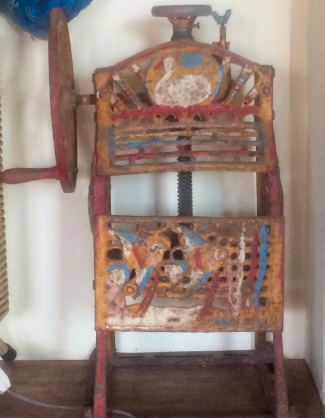 The stone stairway tempted us, it seemed to be promising riches beyond compare and so we ascended (all 240 steps – most of which were bereft of shade).  Admittedly, the view at the top was breathtaking but what lay beyond can only be described at best as pure wasteland, at worst an uncleared minefield with a pagoda on the far edge which we couldn’t decide whether it was half built or derelict.  Either way it was rubbish and not worth the climb (or the aching calfs we both had the next day). 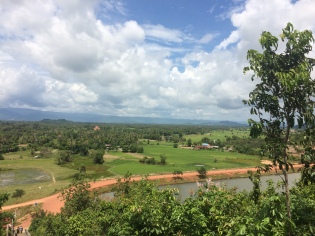 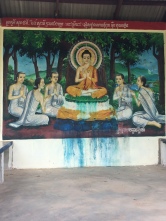 Nature wins this award.  First, when we arrived in Kampot we were greeted my a sky that could have been pulled straight from a Monet painting.  Then on the first morning I opened my eyes after my meditation by the riverside to a beautiful rainbow directly in front of me and finally, I walked out of the room to meditate on the last day to be greeted by yet another rainbow #blessed 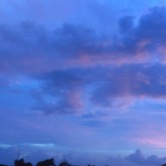 The list of awards could go on and on but I’m going to finish by awarding just one more:

Whilst getting the bus in Cambodia generally involves a number of pickups on route slowing the journey down considerably, special mention must go to the scheduler who had a bus starting in Kampot to then pick up people in Kampot to take them all back in Phnom Penh.  This resulted in us spending the first one and a half hours traveling ten kilometres further away from our destination than when we started and navigating the same crazily busy strip of seafront in Kep which we had experienced on the previous day – there was more than one superlative going through my head at this point I can assure you! 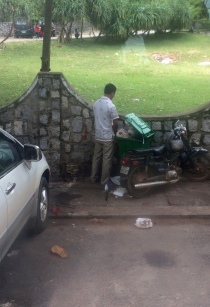 Anywhere is a toilet when you’re on a Cambodian roadtrip 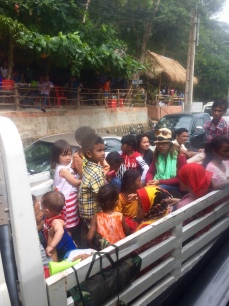 A truck full of tourists trying to get out of Kep

The lovely curtains on our bus

I can’t wait to return to Kampot to hopefully experience more superlatives in what is a fabulous, sleepy, Cambodian river town.

3 thoughts on “A trip in superlatives”