I’m currently on holiday.  Now I know at this point some of you are probably thinking ‘what’s new there?’ but this is an official ‘fill in a form’ type holiday where I don’t even go in to the Ministry of Fish and pretend to work.

And the reason for this holiday – my lovely mum, Lorraine, and auntie, Yvonne, are visiting Cambodia for 2 weeks and I am happily performing my duties as tour guide.

Duties commenced on Sunday when we (Sophat and I) collected the intrepid travellers from Phnom Penh airport.  Sophat excelled by taking me on a new route which not only took us past expensive international schools and Truman Show like gated communities along with the headquarters of the ruling Cambodian People’s Party, but also through the most overt red light district I’ve experienced to date.  The two arrivals had eyes on stalks as we passed shop after shop with KTV signs ablaze and rows of girls scantily dressed in red lounging outside looking bored out of their brains.

For reasons of health and safety (and also my sanity) I had chosen to put the pair up in a nearby hotel and so we dropped them off there and once settled in I headed off home to bed.

Day 1 proper involved a tour around some of the sights of Phnom Penh – The Royal Palace, Wat Phnom, Wat Onalum and the National Museum.

It was my first visit to the Palace but it certainly won’t be my last – it’s set in beautiful, tranquil, lush green surroundings and the various buildings are a sight to behold.  There’s an amazing fresco in one of the courtyards depicting the ancient history of the country and whilst slightly tarnished and stuck down with tape in places, the silver tiled floor of the silver pagoda is pretty damn special. 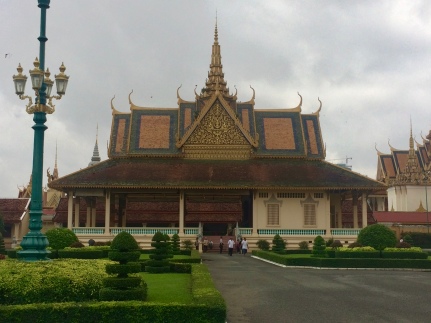 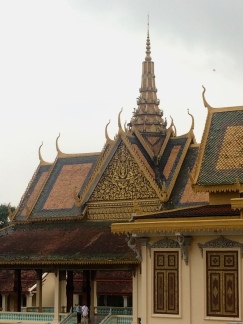 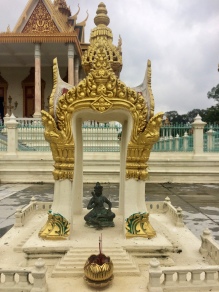 I’ve visited Wat Phnom before but was happy to return as it’s a quirky little place with an odd Chinese/Vietnamese temple off to one side (they feed raw pork and boiled eggs to statues of lions in a conveyorbeltesque blessing ceremony)and despite being a tourist attraction it still very much feels like a working temple with a constant stream of locals praying, making offerings and asking for blessings.  And of course I got to show mum & auntie Yvonne the fabulous bat tree opposite.  Being close to midday no bats were flying but they were still very visible and no less mind blowing to see than on my last 2 visits. 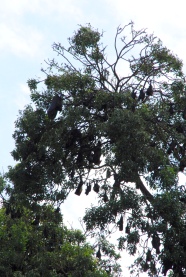 Lunch was in a funny little restaurant on the riverfront that Sophat recommended.  The walls are adorned with messages from people all around the world and upstairs there’s a packed little balcony where you can sit and look out over the river whilst you eat.

Wat Onalum was next which is another favourite of mine in the city.  Located close to the palace, every time I visit there’s carving of some sort going on.  This time two guys were repairing a pair of life sized elephant sculptures.  Much to mum’s astonishment they were squatting atop the elephants in flip flops wielding axes to pieces of the solid red wood characteristic of the region to whittle them down to replace the rotten sides.  I also love this temple because, despite being right in the heart of tourist ville as soon as you step inside the compound the energy level drops and a sense of calm comes over you.

Sophat was off at the Ministry of something or other getting told off for not filling in some or other form correctly and so we meandered slowly and sweatily from the Wat, via a gorgeous jewellery shop for an aircon blast, to the National Museum.  Not being a lover of bits of pot I sent the intrepids inside and sat in the gardens basking in the sun which had finally decided to make an appearance.  Sooner than I expected my visitors reappeared.  Apparently, it’s not full of bits of pot but is full of statues which didn’t really float their boat.

By this point we were all knackered and Sophat brought us to my house and that’s where the fun began.  The ascent of the spiral staircase was hilarious – I swear it took 5 monutes or more for the climb to be completed.  We finally all made it to the top where I whacked on the kettle and we all settled down for a good old British cup of tea (or in Sophat’s case coffee and in mine water as I’ve only got 3 cups J).

All in all a fun first day with my visitors in the Kingdom of Wonder.