Yesterday saw me saying goodbye to the much maligned teams at VSO and the Ministry of Fish.

I kicked off early with a trip into the VSO office to collect my passport, surrender my motorbike helmet (Jumbo Jim will be pleased to know I intend to replace it with a funky pink one which may or may not also have flowers on it) and say my final farewells.  A few of those that I said farewell to are people with whom I intend to stay in touch with – the gorgeous Phirum with whom I’ve shared so many wonderful times over the last 7 months both in and out of VSO time and the wonderful kind and gentle Sam Moly who I’ve really enjoyed getting to know and took my mum  and auntie Yvonne under her wing like a true mother hen when we met up in Phnom Penh.

I also had the dubious pleasure of seeing Cockwomble during this visit.  Those of you who have been with me from the beginning may remember Cockwomble was the guy who managed to piss me off less than 24 hours after I arrived at the VSO office and was also the wearer of trousers whose hem had fallen out with his shoes and therefore resided 2 inches up his shin.  Yesterday, amazingly, we had an intelligent conversation with him failing to come out with any controversial, condescending or otherwise shite and perhaps even more amazingly, wearing trousers of an appropriate length.

And so I left the VSO office content and hopped into Sophat’s tuktuk for my last trip to the Ministry of Fish.

Once there we were greeted by Huong and so I took the opportunity to communicate with via Sophat rather than resorting to wild gesticulations and random gurning on which our conversations usually rely.  Sophat explained to Huong that I was leaving and I would miss seeing his smiley face every day and as I  had suspected he confirmed that Huong is actually pretty sick (he’s often absent from his gatepost for days at a time and on his return gesticulates wildly around his stomach whilst putting on his best sick face to explain to me where he’s been) and is due to retire imminently.   We had a little hand hug, exchanged a few big grins and sampeahs and then Sophat headed off and I headed in.

Next stop was to see Loueng.  A quick chat, a gift of the latest Ministry of Fish diary, a ridiculous palaver as 3 people who are old enough to know better attempted to get a couple of selfies and a promise that I could call him anytime I needed, even if I was in prison!?!?! and that farewell was done. 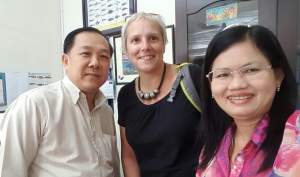 The day passed quietly with me sorting out the mess I had created on my desk (I’m not sure how I managed to accumulate so much paper when I achieved so little but hey ho them’s the breaks) and before I knew it it was time to head off.

I returned the keys to Danith – one of the two people who has been my salvation during my placement.  Danith gave me a home when no one else at the FiA wanted me.  He put up with my incessant noise courtesy of radio 2 (which I sometimes sang out loud along with), a creaky chair and a tendency to randomly Skype people when I was a bit bored.  He became my eyes and ears at the Ministry, keeping me up to date with the comings and goings of the DG and the latest news on the ongoing illegal fishing saga, giving me a heads up when things were going on that I might be interested in, ordering my water for me and letting me know when we might have unofficial days off due to upcoming Chinese celebrations.   His parting words were an offer to pop in anytime for a chat and to use the wifi – what more could a girl ask for.

And then it was time.  I headed out of the building to the sunshine and the beaming smile of the true salvation during my time in placement – Huong.

We took one last sunglass swap selfie, had a big old hug and that was when it happened – a tear fell gently onto my cheek as I clung to this boney old man with the 3 gold teeth who had made my daily ventures into generally lonely and unfulfilling days ok.  Seeing his smile, laughing and joking despite not having a clue what either of us was saying to the other, dicking about swapping sunglasses, hats and phones has kept me sane and for that reason the wonderful Huong will remain with me long after the other memories of the Ministry of Fish fade.  A truly lovely man! 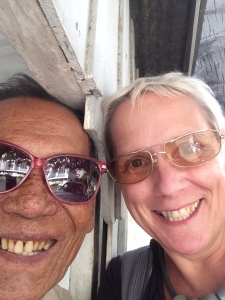 For those of you wondering what’s next, please come back tomorrow when I’ll fill you in on where I’m at in my new life in flip flops.