Spoiler alert: this post includes tales of internal angst – readers who don’t want to indulge in my existential moping please step away now.

This post comes to you from one of a number of amazing cafés in Kampot – Epic Arts Café.

I chose this lovely place as my office of choice this Monday morning for a number of reasons:

I’m not ashamed to admit it, this weekend I sank.  It’s been coming on for a few days (I blame the full moon) and I’ve half-heartedly fought it off (for fought off read tried to ignore by indulging in mindless web surfing, TV gorming and copious amounts of sleeping) but as of Saturday afternoon I finally gave in, acknowledged that there was stuff on my mind and stuff that I was doing (including the avoidance techniques I’d been employing), that was making me feel shit and took to my regular place of refuge – my bed.

There were glimmers of joy interspersed in my trip to the doldrums – a lovely chat with my sis et al on Saturday was a temporary reprieve, the one that followed with Jackie was positively hilarious and actually inspired me to get off my arse and go see the sunset on the river before scurrying back to my cave to mope.   Sunday morning started well with an early morning visit to the market – there’s a whole post about that place coming soon as I bloody love it there – and at one point I did step away from my bed once more to indulge in hammock time only for another bloody bracket to come loose, causing the hammock to unceremoniously dump me on the terrace once again – me and that contraption are going to fall out soon I tell you. 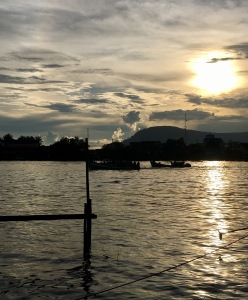 And the time in between the little spurts of joy was used in both wise and foolish endeavours.  I stepped into meditation to try to ground myself and shift some of the stuck emotions I knew were lurking and finally managed to have a damn good gut wretching cry which was painful and cathartic in equal measure.  I stretched my crunched up, shrunken body to relieve some of the tension I’d amassed from carrying the weight of the world on my shoulders and having regained the inches I’d lost I got up from the bed and tidied my room, mopping the floor with a mint infused mixture which I also sprayed copiously around (yes I have uninvited, unwelcome visitors to my room who need to jog on).

The less wise periods of time were spent in conversation with Norman who, rather than laughing in the face of my ridiculous existential crisis added fuel to the fire with his assertions of my worthlessness, fraud and the same old shit he always spouts.  Needing to feel shit (and knowing that I’ve been engaging in some stuff of late that hasn’t helped with how I’m feeling) I indulged him for a while before turning up my music and tuning in to that instead until he finally stopped chattering and hopped back into his cage.

And as I sit here this morning, replete after a yummy bowl of goodness and a mug of strong black coffee I’m aware that the feelings are still here – I haven’t sorted this shit out yet, maybe some of it I never will, maybe some of it I don’t want to know the answers too and maybe still more that I already know but can’t yet face.

But regardless of what remains unresolved, fundamentally I’m OK.  I admit it, at the moment life doesn’t make sense and I’m to a degree enhancing the confusion of it by engaging in unhealthy coping strategies rather than facing the shit head on and dealing with it.  But step by step I’m getting there and when I do do the good stuff and start the day right by surrounding myself with amazing people like the ones here at Epic it ain’t all bad.