In a fit of bizarreness yesterday, the song ‘On the street where you live’ from My Fair Lady came into my head mid-meditation and regardless how hard I tried to  practice non attachment and ‘let it go’ it hung around like a bad smell.

So much so that in my quest to avoid doing meaningful work post meditation I trawled through the internet looking at shite whilst listening along to the My Fair Lady soundtrack on Spotify.  And just as The Street Where You Live came on I happened upon the giggle inducer below, put two and two together and started to form a blog post in my head.

And so here I am, a day later, introducing you to my neighbourhood.

As you may or may not know, I am blessed to be living in a large house owned by an American woman named Linda who no longer lives full time in Cambodia.  My Kiwi friend Linda (confusing I know) had been living there a while but was due to leave shortly after I came back in September and spoke to American Linda about me moving in to which the response was positive and so I moved in.

The house is in a fab location, just off the main market in town (the blog about that is coming I promise) along a very bumpy dirt track which in the rain turns into the stuff of my phobic nightmares.  To try to give you a taste of what the journey along there is like I very bravely did a one handed cycle ride this morning in order to make the following little clip (the lengths I go to for you my beloved readers eh):

The house itself is an imposing blue structure surrounded by coconut palms, with a pond on one side to provide me with my nightly frog chorus and a swampy pond area on the other side to provide Sareth and the girls (my housemates) with a supply of salty crab (that’s another blog in the writing).

I live upstairs, occupying two rooms and a lovely large terrace which houses the hammock from hell as well as lots of lovely greenery, two different seating areas, a magic mop (OMG everyone should have one of these!!!!) and my yoga mat.  I say I occupy two rooms but that’s not strictly true.  The house itself is getting pretty old by Cambodian standards (20+ years) and the utilities are starting to show their age.  I therefore have one room where I live/sleep that has everything I need except for a properly functioning loo with bum gun and that’s why I use the other room – for the purpose of bodily functions that require a toilet to flush properly and powerfully.   You may ask why, if this is the case, I don’t use said other room as my main residence, especially if I tell you that it’s bigger than my room and has a much bigger bed with a fabulous proper non dippy mattress.  Well, here’s the thing, despite those positives the room isn’t as bright as my room is and I really enjoy the light, the light in the bathroom doesn’t work due to the quirky electrics of the house which means miss scaredy cat wouldn’t be able to get up and go for her woman of a certain age middle of the night wee without having a hissy fit about what might be creeping around, the shower doesn’t drain well (another nightmare for Mrs wet floor phobia here) and if that weren’t enough – the wifi doesn’t work in there.  How on earth am I going to engage in my lying in bed, procrastinating by watching Real Housewives series activities if I move room?

Here’s a little video of the terrace between the two rooms that I made when I first arrived: my home

Anyway, moving on.  Downstairs (accessed via another example of ridiculous Cambodian staircase design) is a massive kitchen and dining room that we all share which has the luxury of a full sized proper oven and hob – a real rarity in Cambodia.  Sadly, it’s a victim of quirky electric problems and so working in there in after dark is something of a challenge, I have still not quite mastered Kiwi Linda’s method of teasing the light switch into submission method and instead opt for only cooking in the daytime and reverting to the ever faithful iPhone torch to lead me to the fridge and back for pre-prepared foods for after dark.

Outside the confines of my fabulous quirky home a small community resides, most notable being my immediate neighbours.  My bedroom and terrace overlooks their long windowless home and so, even when I can’t see them I feel I’m a part of their family as I listen to them going about their lives, cooking, cleaning, washing, babies crying and doing something which sounds like they’re playing a very loud one sided ping pong match for approximately five minutes at exactly the same time each evening.

Daily evidence of the activity going on next door

This little window into their lives is a lovely part of living within a Cambodian community, but the best bit is when I venture out.  No matter what mood I leave the house in, I can guarantee it’ll be lifted before I’ve managed to negotiate my way out of the gate and closed it behind me thanks to this family.  Day or night, one or more of them is always there with a cheery hello and if the kids are there there’ll also be a “what’s your name?” exchange which never goes any further but induces grins on all sides.  Baby (the one of the gravy browning eyebrows blog post) blows kisses on command and generally grins and waves and they’ve recently acquired the cutest puppy who barks and yaps and wags his tail whenever he sees me. 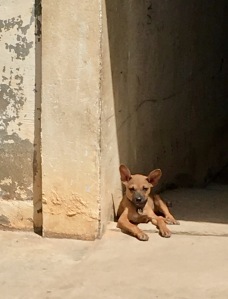 The “hello, what’s your name” gang

Diagonally across from the gate lives Mr ‘Cop a Squat’ (yes that is a line from Pretty Woman – so shoot me).  You may have noticed him in the video earlier in the post.  Despite my attempts, he doesn’t speak and rarely cracks a smile, he just squats.  Barky dog may or may not greet me on the corner although I think he’s so relieved that the mad water pistol wielding foreigner has left, that he more often than not just trots silently alongside for a few paces as I make my way along the lane before leaving me as a pile of rubbish becomes infinitely more interesting.

As we reach and round the corner (the one where I nearly went head on into the car) live a few families with ‘hello’ yelling kids and adults who are now getting to know me well enough to throw out their own hellos as I wobble past on my bike (I wobble even when two handed).

And before I know it I’m spit out into the madness that is the market square, but not before another exchange of hellos with the lovely friendly family on the corner who sell food and have a, usually adorable, baby who was today covered in snot rendering it (yep I have no idea if it’s a girl or boy) slightly less cute and extremely unphotogenic.

So there you have it, a potted commentary of my home and the street where I live here in supposed to be rainy, but currently very sunny Kampot.