The New Year has started quietly on the writing front for me.  This is in no way down to having a lack of material to impart, but is a consequence of my lovely mum rocking up on New Years Day combined with a big work project in the same week.

Having had a few days to decompress after the whirlwind, I’m going to now attempt to get some of the ensuing madness onto the page and into your newsfeed.

And first up it’s the meeting of the MaMas.

As soon as we rocked up home in Kampot, MaMa was smitten with mum.  Astounded at her health despite her advancing years MaMa was keen to point out how unhealthy she was as a way of confirming this fact – cue extreme gesticulation, grinning, laughing and gurning coupled with loud gabbling in Khmer.  I probably managed to pick up one word in every 10 and from this managed to make up a tale of what she was saying to translate to mum and appease MaMa that her message was getting through.

Mum’s strongness was then mentioned at every opportunity: on day one it happened upon delivery of the papaya (morning); heading out into town on foot (lunchtime); milk fruit giving upon our return from town (late afternoon) and at the post dinner ‘chat’.  The ‘conversation’ pretty much went as follows:

We merrily play this game for days, mum perfecting her serious sympathetic face and me uttering words of Khmer to show that we understand and empathise.

That is until one night this week when, during an entertaining post drinking pantomime from PaPa, MaMa waddled over to sit with us and ‘chat’.

All started as normal, discussion of PaPas “party, party” induced state, the strength of mum versus the not good of MaMa, MaMa checking I was OK and apologising for the lunatic (oh he of Flashpacers fame –rest assured there’s more in that vein to come).  We sat in companiable silence for a while and then it happened.  MaMa looked and down and noticed THE FEET!  For those of you that don’t know my mum she’s not blessed with the most attractive ankles and feet thanks to an oedema occurring when she was pregnant with me.  This has turned her ankles into full on kankles which lead nicely on to severly swollen, misshapen feet.

Well, on sight of this MaMa was gobsmacked to say the least.  Once she’d got over the initial shock, the prodding and poking started.  An order was given for mum to elevate her feet to aid recovery and at the same time giving MaMa better access. My attempts to tell her its not a problem fell on deaf ears as she sucked in her cheeks, furrowed her brow and continued to prod.  Poor mum, who can’t stand her feet being touched, coped like a trouper, laughing and smiling/grimacing whilst trying to make MaMa understand that it didn’t hurt and wasn’t a problem as I turned to Google translate for support.  I tried every word I could think of to explain – no pain, not hurt, not sore, don’t touch – but MaMa failed to be convinced.  I changed tactics, going for the it’s been the same for forty years’ slant but still MaMa stroked, prodded and poked, a look of puzzlement and pain across her face.

Just when we thought it couldn’t get any worse, the handbag was reached for.  Out of it came a huge pot of Tiger Balm which MaMa proceeded to slather lavishly over her hands before beginning the process of massaging it into mum’s legs.  This continued for quite some time before MaMa was satisfied that enough balm had been applied.  A final rub, a repetition of the order to keep them elevated and MaMa waddled off.

Relieved to no longer be the centre of attention and for the foot touching torture to have stopped mum foolishly lowered her feet to the floor.  Boom, MaMa was on her like a flash, yelling as she waddled back and demanding the feet once more be elevated before giving them a further stroking.

The next day we decided to wander into town.  This time, instead of marvelling at mum’s strength relative to her advancing years MaMa demanded we get a tuktuk.  Pulling her ‘it’s painful face’ she repeated the order until I put on my best teacher voice and stated “Ot panyha!” (not a problem) before marching off with mum in tow.

Later that night the massage ritual was repeated – rest assured, the Tiger Balm factory won’t be going out of business anytime soon – mum grinned her way through it and I just sat and watched, at a loss what to do/say to make MaMa stop. 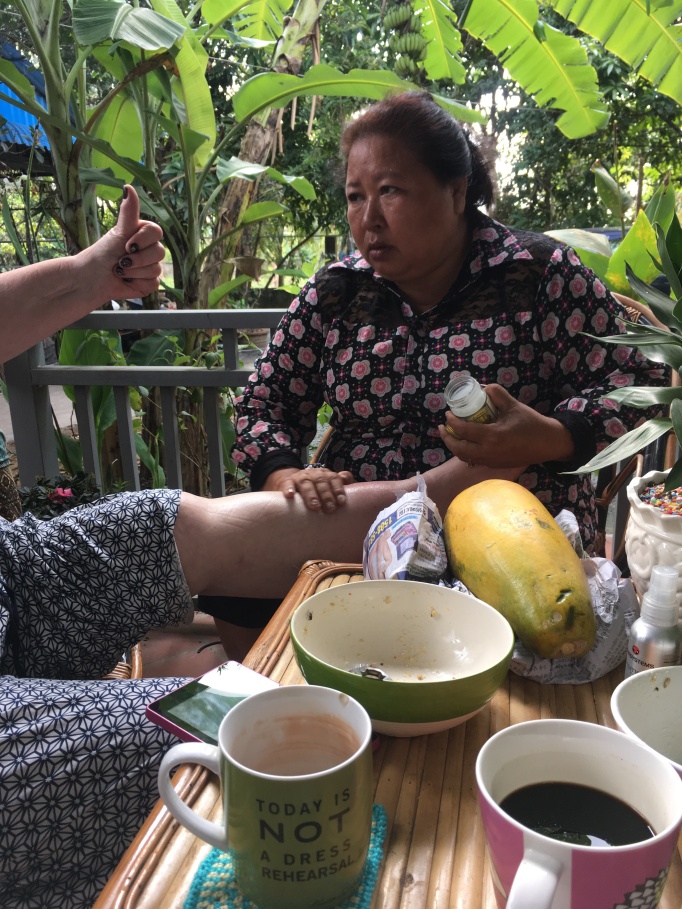 The massage ritual (and the second papaya gift this week)

A flash of genius the next day led me to asking the lovely Channy at the spa to write me a note to give to MaMa in the politest way possible telling her pack the f*ck up!  We settled on the following:

My mum’s legs don’t hurt, they just look very bad. There is no pain but she doesn’t like them being touched.

Thank you very much for your kindness”

I headed home, pleased to have a solution but anxious at the same time as I really didn’t want to upset/offend MaMa.

The evening passed without opportunity for the note to be shared, but next day MaMa was back (with sister in law in tow for good measure) to continue her ministrations.  I tried a it’s not a problem all is good approach first but finally had to succumb and drag out the note.  MaMa sat and read it before throwing her head back to cries of ‘oh oh’ followed by repeated muttering of ‘sorry sorry’ accompanied by copious sampeying (the prayer like hand gesture).  The ‘sorry/no problem’ game was played for a while as we smiled and laughed our way past the embarrassment before resuming normal service of MaMa regaling sister in law with tales of mum’s strength and bemoaning her own weak achy limbs.