I’ve been aware for a while that I needed to get off my lardy arse and go experience life to help me get over my funk and a post on a friend’s Facebook page advertising an interesting workshop in Phnom Penh was just the push I needed.

So, last weekend I packed up my knock off Jack Wolfskin rucksack and headed off to the big smoke.

The workshop in question was all about gut health and how to make pickles, a food that I happen to love (never leave me alone with a jar of pickled onions or beetroot unless you need an empty jar quick smart!)

After an informal presentation about the gut-brain connection, probiotics and all things gut health it was time to taste some samples (along with the most delicious sour dough rye bread, the smell of which took me right back to my time living in Warsaw) and then get stuck in to the making.

First on the list was Kombucha, which I now know is fermented tea.  The key ingredient in the fermentation process is called a Symbiotic Culture of Bacteria and Yeast or SCOBY for short and we were being taught how to grow our own.  You basically chuck some super sweet tea into a jar with some previously fermented super sweet tea, cover it then sit back and watch your SCOBY baby grow.

Five days on from the workshop I can confirm that growth does occur and that it’s not a pretty process, but Google assures me that the bizarreness happening in my kitchen is perfectly normal SCOBY growth. 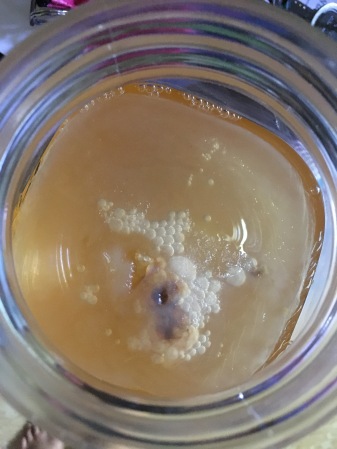 Once the tea has finished fermenting, I’ll have myself a fully grown SCOBY and starter tea for a new batch and around ¾ litre of kombucha ready for flavouring and second fermentiaton.

Just like secondary school practical science lessons, this second phase could lead to explosions (a phenomena we witnessed at the workshop when one poor unwitting attendee opened a bottle we’d been presented to try only to drown herself and the table in front of her in fermented fizziness) and also involves the giggle inducing terminology – “burping” *sniggers behind hand whilst typing*.

With our Kombucha fermenting away we moved on to veggie pickling and were taught two different types, traditional Polish pickled vegetables (our hosts were both of Polish descent) and Sauekraut – a favourite of mine and a food I rave about for gut health but am quite often disappointed by when buying the ready-made variety.

I met with no such disappointment when I sampled the sauerkraut at the workshop and therefore watched on eagerly as we were taken through the process.  And a very simple and therapeutic process it turned out to be.  Basically, you just shred a load of cabbage. I personally hate chopping stuff and so delegated the task to Hanna whilst I got to enjoy the therapeutic part. You basically lob the shredded cabbage in a bowl with some salt and knead the hell out of it.  The aim is to end up with enough liquid from the cabbage to cover the cabbage in the jar and I can confirm that with a lot of pummelling, kneading and squeezing it can be achieved.

All that’s left to do then is throw in some caraway seeds (or any other spice if you fancy it), pack the cabbage into a clean jar, pour over the cabbage water and then place a whole cabbage leaf on top to make sure nothing floats up.  Then cover it with a cloth or piece of kitchen towel and leave it to ferment. 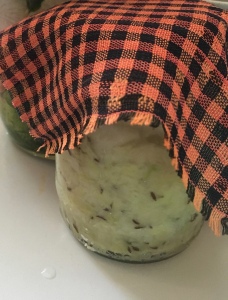 Pickled veggies are even easier.  Chop veggies, put in jar, add spices, pour in cool, boiled, salted water to cover, weight veggies down with a rock (obvs sterilise it first) then cover with a cloth and leave. 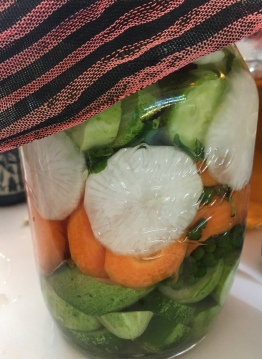 The workshop finished, all that was left to do was to promise my hosts that updates of my SCOBY baby’s progress would follow (including his name if I got that ridiculous (from the woman who has a chimp called Norman living in her head that’s not such a bizarre prospect!)) and work out how the hell I was going to get SCOBY and his pickle friends home in one piece on the rollercoaster that is a Kampot Express bus journey.

Some convoluted wedging in under my seat of the bag of pickling goodies drew curious stares from my fellow passengers which I did nothing to abate by insisting on hanging on to the bag handles for grim death throughout the journey meant that we all made it home in one piece and both SCOBY (no name of yet but open to suggestions) and his pickle buddies now sit fermenting away on the kitchen worktop, filling my kitchen with the mild fragrance of vinegar as they do so. 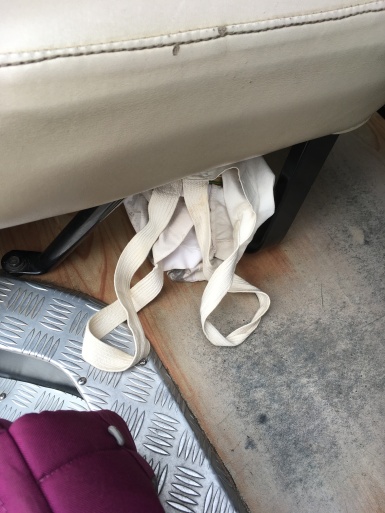