Ok, so maybe catastrophe is a bit of an over dramatisation but I liked the alliteration so have gone with it anyway.  I’ll get on to what the minor catastrophe was in a bit, but first for the comedy….

Yesterday, after our mammoth walk, Totie and I headed to GoodLuck to meet with our lovely recruitment specialist Kheang, from the VSO country office, to take new volunteer Amy out for lunch.

I enjoy spending time with Kheang, she makes me laugh.  She has a fabulous sense of humour with a great command of my favourite characteristic – sarcasm and so, as you can imagine, we get on like a house on fire.

With Amy in tow, we headed out to an all you can eat buffet restaurant, sat ourselves down and one by one headed off to explore the buffet, returning with plates and bowls laden with various south east Asian culinary delights.  The food was great as was the banter and we happily passed an hour or so joking and eating, eating and joking.

At one point Kheang grabbed my hand and just as quickly dropped it again.  Before I could ask what was wrong she stated:

“Sara, your hand is SO hot.  This is because you haven’t had a poo yet today!”

To which I replied:

“Erm actually I have had a poo thank you.”

At the mention of poo Totie’s ears pricked up and she confirmed that hot hands were indeed an indicator of a build-up of toxins in the system and asked if I was sure I’d had a poo today.

I again reiterated that I was sure I’d had a poo and also pointed out that my hands were not hot at all, they were in fact just their normal temperature but Totie and Kheang were having none of it, both adamant that my bowels were in need of emptying.  And then, just to add the icing to the cake, Kheang happily declared that my hands are hot because I am indeed full of shit!

Nothing like a good old fashioned compliment to go with your Sunday lunch eh!?

And now for catastrophe….

This morning started well.  I woke before my alarm and after a brief QiGong session sat listening to my street waking up as I drank my tea and ate breakfast.  I showered, dressed and headed out, navigating the crazy staircase with ease.

A relaxed stroll to the end of the lane, a corner turned and bang – I was on the floor.  It seems that as I turned the corner I had skidded on some building sand and taken a tumble.  I jumped up as quickly and elegantly as I could muster and walked off hoping to god that none of the approximately 2,000 motorbike and car drivers hurtling past me on on the road had spotted me (yeah right).

As I nonchalantly walked down the road pretending I wasn’t in pain and biting my lip to stop the tears I glanced down to see blood dripping onto my foot.  I carefully lifted my dress (noticing as I did that my newly washed and pressed dress now sported a huge dusty brown patch surrounding a newly appeared hole) and discovered that my knee was pouring with blood.

I dug around for a tissue in my bag, unceremoniously bodged it onto my bleeding knee and hobbled the rest of the way to work.

Once at my desk, pouring with sweat from the exertion, I cleaned my wound and examined it more carefully.  Thankfully it’s superficial and looks fairly clean so I think I’ll probably avoid sepsis and amputation this time – phew!

But rest assured, I’ve learned my lesson and will be taking corners with much more care from now on. 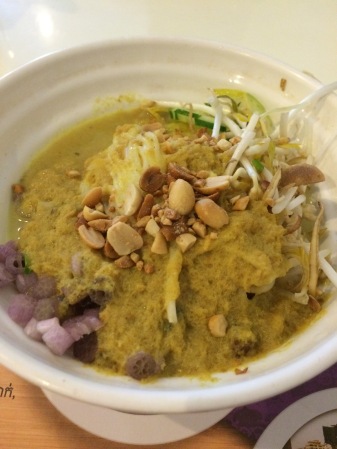 Delicious Khmer Noodle Soup (maybe this is what’s making me full of sh*t!?)